Dancing on the Edge of the Pacific

The West Berkeley Shellmound site is a sacred place.

For all of us, even now, its location sets it apart, in a place of very great beauty, an awesome viewscape, a mild climate, abundant nature, sunny days, oceans of fog, sometimes dark and starry nights reflected in the bay and ocean. It was and is a sacred place for very many reasons. It is unique and very special, and it should be preserved and protected. 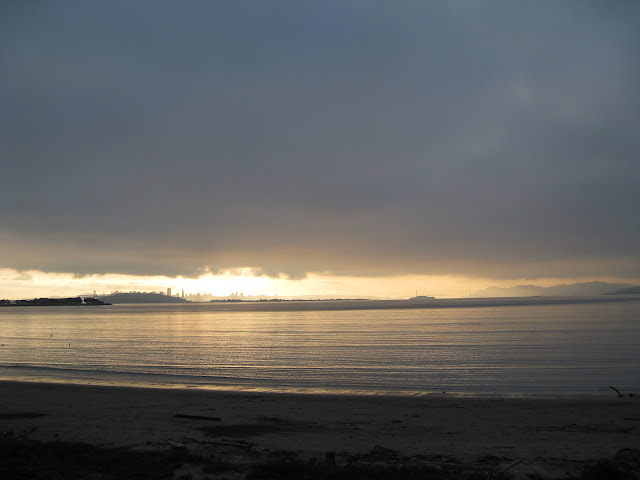 This is attested not only in the archaeological record, but also in the oral traditions of the Ohlone people who have called this place home for thousands of years. A closer look at this storied bit of earth can reanimate the landscape for those who live here now, giving us a glimpse of the dancing spirit animals that still live in our geography.

This Shellmound was an immense mound, constructed for more than four thousand years, starting around 3,682 B.C.E., thus very ancient. It contained shells, bones and ashes of ancestors and animals, mixed with wood, artifacts, ceremonial offerings, and earth. Some still remain, under and around its original footprint.

As shells were currency among Native American people, the West Berkeley Shellmound was a bank of wealth that could be used in trade. The Shellmound was located on trade routes; California shells have been found across the continent as far as Mississippi and Alaska.

The Shellmound was an observatory, with wide views of the stars, sun, planets, and the moon, used as time markers, and a clear sight-line through the Golden Gate to their Islands of the Dead, on the western horizon. They observed the Pleiades and aspects of the winter solstice; they maintained a descriptive calendar. The Shellmound would also have been the location of ceremonies and dances on the winter solstice and other occasions.

The Shellmound was a mortuary complex. Cremation, funeral, and mourning ceremonies and feasting included hundreds of people for periods of time. It was a portal for the dead with straight lines of travel for spirits across the bay to Pelican Island, now Alcatraz Island, and then across the ocean to the Islands of the Dead, now the Farallon Islands, or Farallones. 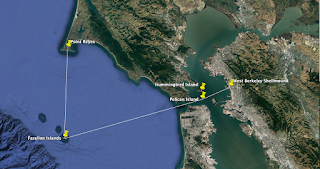 The Ohlone witnessed much there, long passages of time and massive geologic change, earthquake, and flood, which their ancient stories reflect. The mythic characters of those stories—Coyote, Eagle (or Condor), Hummingbird, and Coyote’s Flea (or Shrimp) Wife—are still present, embedded in the landscape of the Bay Area and beyond, as part of a monumental geomorphic theophany, the presences of great, spirit beings in place, as place. People lived there on the bodies of those beings. The West Berkeley Shellmound participates materially in that theophany.

Coyote’s head is Marin County, facing roughly south-southeast. The left side of Coyote extends up the coast, perhaps as far as Lake County. His nose is at the Golden Gate, toward his Flea Wife, as San Francisco County, who looks to the east. Her body is down the Peninsula, and while her head is humanoid, her body is bulbous, with dangling legs, like an immense flea or shrimp. 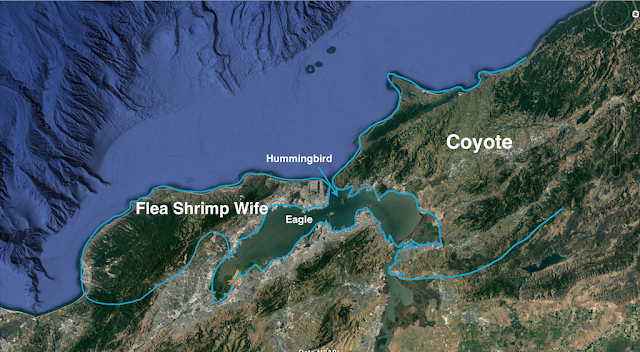 The entirety of the Bay is the Eagle, with wings wide spread. Angel Island is the Hummingbird in flight, facing south-southeast. Coyote’s footprint is found in San Pablo Bay. 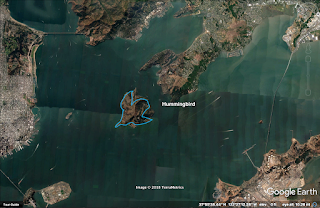 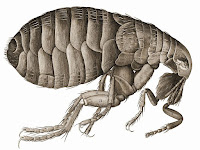 The Shellmound was a portal for the dead, at the midpoint of the Eagle’s tail. The beak of the Eagle points through the Golden Gate. A straight sightline runs from the Shellmound, up the middle of the Eagle’s body, through the Golden Gate to the Farallones.
After death, the spirits of the dead would travel to Pelican Island where they rested for four days. Following cremation or burial, they flew west to the Farallones on that straight line; the Eagle carried the spirits there.

There may be more mysteries still to uncover with the West Berkeley Shellmound and the larger Bay Area geomorphic theophany.

The Ohlone's neighboring tribe, the Coast Miwok, knew that they lived on the body of Coyote, and their spirits of the dead migrated from Tomales Point at Point Reyes to the Farallones.

The Shellmound, together with this geomorphic theophany, is a World-Heritage-class site. It all could be preserved for the future, if more widely known and appreciated. There is no better time than now to bring this back into its fullness, before it is too late. It still can serve to remind us of the great importance of place in our lives. Its stories center us in our local landscape and respect for it.

An Ohlone song goes, “Dancing on the Brink of the World.” Perhaps all who are here, Coyote, his wife, Hummingbird, and Eagle, are dancing on the edge of the Pacific. 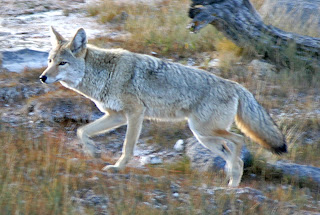